Three separate public domain crime movies? Yeah. Some more well known that others, I checked them out but didn’t have enough to say for separate reviews or drawings. Spoilers within.

I’ll start with the meatiest of the three, which is probably the shortest and the cheapest made. I wanted to check out Detour for a long time, and actually owned a copy of it on DVD. I probably lost it in one of several moves over the recent years. Much has been written about the movie: filmed on the cheap, almost forgotten, rescued from obscurity by critics (and its cast) and regarded as a great noir film. Roger Ebert even has a summary in his “Great Movies” retrospective series, and he nails the finer points.

That’s very nice of the late Ebert because yes, it has fine points. Points that make up a serrated knife that will cut you to the bone and show you know no remorse. It’s economical on characters and, this is where my opinion differs slightly, story. For a bleak (BLEAK) story of world weary and cynical characters, there’s not much here that shows any kind of development or even real tragic path of our noir antiheros.

It opens up in a rather hauntingly beautiful manner, with a defeated Tom Neal walking into a diner and verbally abusing the staff and customers for, heaven forbid, inquiring about his food order or playing the jukebox. The mood is set: this guy has been through a LOT, and he’s going to drag you through hell with him. And then the movie flashes back to better days, when he was a pianist at a New York joint and his lovely and loving lady is the torch singer. She exudes kindness and hope and he shrugs off her affection and her invite to join her in LA with the kind of hardboiled indifference used from detective to femme fatale. She leaves, but misses him, and she invites him to LA. He figures the best thing to do is hitchhike his way there.

Tom Neal is picked up by a shifty guy who you think is going to put Neal in all kinds of bad situations. Nope, he actually buys Neal dinner and is pretty nice, even though it’s hinted he’s a criminal (a bookie). And then BAM, he dies of a heart attack (I think; Neal tries to wake him up and the Wikipedia entry describes an accident where Neal opens the door and the guy falls out and hits his head on the ground, but I took that to be a sign that he had died in the car and possibly in his sleep). Fearing that the cops will pin it on him as a murder, he figures that he’ll be okay if he covers it up, wears the bookie’s clothes, and keeps driving alone.

He pays it forward by picking up another hitchhiker, a dame played by Ann Savage. It’s unclear further what had happened next, but by sheer luck, Savage KNEW the dead man, had run into him earlier and gotten into a violent altercation. Now Tom Neal was wearing the guy’s clothes and driving his car, and so she promises to blackmail him and make the rest of the trip a living hell.

It’s a STRANGE moment. Savage is practically out of it in one moment, and then is suddenly full 1940’s gangster moll taking it out on Neal the next. And she sells is pretty well. She’s full of some great and stinging one liners. The rest of the movie is the two of them trapped together in a hotel room, him plotting to get away from her and to his girlfriend (the movie is so short but I forget that she was even there) and her thinking of a scheme to milk the dead man’s ailing parents out of money by passing Tom Neal off as the guy. After some back and forth (the movie lives in the hotel room with them at this point), he somehow accidentally strangles her from the other room with the telephone line.

It’s set up as an accidental killing. She runs into the other room with the phone, threatening to call the police. He pulls on the phone line, instead of disconnecting it from the wall jack (it’s the 40’s so I don’t know how sturdy the lines were, or if they had phone jacks like that way back when) right as she kinda rolls around in the bed and gets the cord around her right as he pulls on it.

As Ebert points out, maybe this is Tom Neal’s character’s way of absolving himself of an actual murder, even if she was a vicious extortionist. It’s just his luck a drugged out possible criminal dies in the middle of nowhere, it’s just his luck he runs into a lady the guy tried to scam (or worse). It’s just his luck he tried to keep her from calling the police on him despite his actual innocence because he won’t go along with her blackmail plans and she ends up dead. He gets to explain this as he leaves the diner and the police pick him up.

And that’s it, that’s the movie.

And in real life Tom Neal got married and divorced a lot and had affairs and beat up people because he was having affairs, and then later shot (by accident, he says) his wife Gale Bennett, with whom he had already had a history of domestic violence against, and was convicted of manslaughter.

Is it noir? It just tells a story of a guy who makes bad decisions. He’s a complete jerk from the start of the flashback, and his whining about being down on his luck throughout the film doesn’t exactly make him sympathetic. He doesn’t do anything to redeem himself, and the tragedy of the film is less about him putting a stop to evil at the expense of his own (free) life, but instead about how he can’t outwit a scam artist and just HAPPENS to kill her, oops. It’s short. I don’t understand the praise for it, other than the opening diner scene and the claustrophobic hotel cage the pair locked themselves into. There’s not a lot of planning in the imagery a classic noir would be known to include or hint at. Ann Savage is pretty great in it, so check it out for her.

What about Cause For Alarm! question mark. Is THAT noir? I don’t know WHAT this movie is. It stars Loretta Young. I’m going to skip to the question “Was her life more interesting than what happened in this movie?” and: yes. I wonder if Alan Moore got the idea for the Comedian/Silk Spectre plot for Watchmen from the life and, uh, coupling, of Clark Gable and Loretta Young. Loretta Young was date raped by Gable and gave birth in (worst kept Hollywood) secret to a daughter, and then raised her as an adopted child. No, seriously. Holy crap.

Who cares about this movie. I’m not even sure what the plot is or the nature of the crime that Young, a doting housewife, finds herself somehow potentially framed for. Young is taking care of her ailing husband, a former air force officer who puts the “passive-aggressive” in “emotionally abusive controlling husband.” He’s bedridden and Young does everything she can to please him. And he pulls insanely jealous gonna-kill-you boyfriend crap: observing her talking to, you know, the mailman, from a window, despite claiming he can’t get out of bed, and then berating her about talking to other men despite the fact that how would he know, if he’s truly bedridden? I can mention the doctor, an old friend that the sick husband accuses Young of using to cover up her supposed plan to kill him (the husband). Or the by the book mailman, whom Young gives a letter that she thinks is some kind of insurance form but really it’s a letter from the husband to the District Attorney accusing Young of killing him…

And then the husband dies, after brandishing a gun and making more crazy accusations against his wife, and from there the movie is a frantic Young trying to get back that letter from the strict mailman. 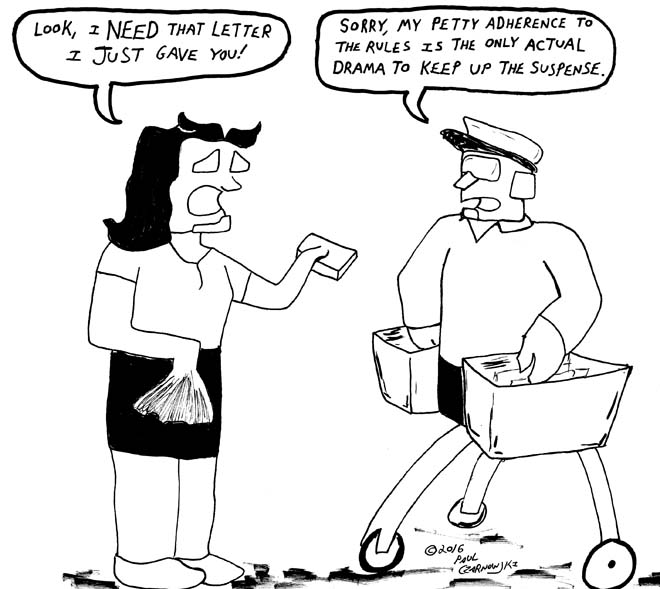 What? I didn’t see that coming. And I also don’t understand the tension as far as a suspense film goes. So, the plot of the movie is that a paranoid man needlessly sets up his wife for murder, and her fate is sealed…and in the hands of a man who lives to tell everyone about the regulations he must abide by as a servant of the law?

Well, yes. One review of the film points out that Young’s adventure is about selfishly covering her butt in the aftermath of her husband dying, but I see it as a woman so controlled by a man she just wants to appease that even the shadow of his death continues to punish her for no reason. I’m not even sure what he died FROM. I thought the whole thing was a misdirect, that he was either trying to drive her mad and maybe even to commit a crime or trick her into a scenario where he kills her but because he was bedridden (he was getting up constantly, and lying about it, so, you know, I thought he was faking it) it ends up looking like he was trying to fake her suicide. Nope. Nothing of the sort.

So, is it noir? No. It’s supposed to be a suspense thriller but it’s more like a misunderstanding you’d see on Three’s Company, but instead Mister Roper dies instead of walking in on a wacky situation.

Finally, there’s Two Dollar Bettor (1951). Not much is written about this anywhere because it’s a predictable (boring) morality tale where an old guy gets addicted to betting on horse racing. He ends up losing money and risking his status in society as a family man and a successful businessman. He starts taking money from the company and then is promoted, once of course all the financial books are audited. There’s a scam artist woman (who was working with the old man’s bookie) who promises to get the money he lost via another shady individual who is in cahoots with the woman and they somehow steal more money from him and so the old guy shoots them. But, in self-defense, because they shoot him too. He heads back to his boss and confesses to the whole thing. The boss tells the police that it was the shady couple who stole the money, and that the old guy died trying to get it back, and was a hero. It ends with the old guy’s daughter marrying the boss’ son and thinking her dad was a hero. The moral: don’t gamble.

That’s it? Yeah. A teenaged Alfalfa from the Little Rascals walks on and off the set, I guess this was the equivalent of a guest appearance. The guy who made it also made a ton of other crime movies, and a few sci-fi ones, including It! The Terror From Beyond Space, a direct influence on Alien. You should watch that instead.

So, should I… no, you can skip it. It’s boring. Don’t bet on race horses even if you win the first two races. There, I summed up the movie for you.

There you go, a triple feature. Enjoy!