What did I watch: The William Castle horror movie “13 Ghosts.”

How many ghosts were there? I never bothered to count.

Movies of the 50’s that weren’t big studio war epics, or westerns, or had a lot of star power, had to have a hook to bring people in and away from their TVs for the night. Even Alfred Hitchcock felt compelled to film a play in 3D (which is a favorite around here, maybe more on that some other time). So when you get down to the Bert I. Gordons, the Roger Cormans, the Ed Woods, they’re the filmmakers of the time working on the cheap (in some cases, filming a whole movie on a weekend) and getting a story based from an available costume or creating exploitative drek straight from the day’s headlines and no deeper. And then there’s William Castle, who went the extra step to get the audience involved.

Maybe the best known of Castle’s films is The House On Haunted Hill, where Vincent Price tortures his visitors with a wide variety of over the top murder attempts. During the film, if you saw it in the theater, a skeleton is released from a box and, on a wire, passes over the audience. Filmed in “Emerg-o,” because the skeleton emerges.

13 Ghost’s gimmick was “Illusion-o,” although most movies telling a fictional story could probably claim the same process, right? In this case, it’s a red filtered image (the ghosts) projected over the otherwise b&w movie when the screen turns blue. You were handed a viewer: like 3D glasses, but with two  horizontal see-through cellophane/theater gel strips, one on top of the other. One blue, the other red. If you wanted to see the ghosts when the black of b&w turned blue, you would look at the red filter. (The blue was there as an opt-out for the more timid viewers.) When there’s a moment where you’re about to see a ghost, the movie tells you just before,  and the screen turns blue and then…there’s ghosts?

I don’t know how projecting black & white film with two color filters worked; were these parts of the reel color? Just filters? Did it actually work? Well, I watched it on youtube on a modern television, and…yes. The whole reason I watched this was because I had just watched a bunch of trailers about Castle’s films which all involve their respective gimmicks, moreso than the stories (of course). I don’t have 3D glasses but I DO have a lot of Transformers and therefore a tech spec decoder, which is just a small red theater gel (or something like it). And yeah, sure enough, when the screen goes blue, you see some red images superimposed over that part of the film.

Here’s when the movie turns blue. 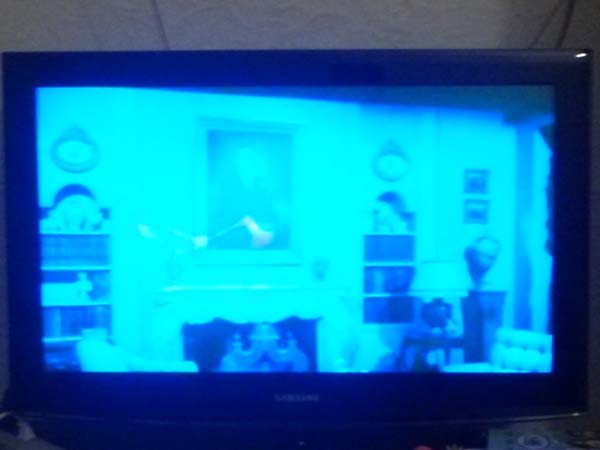 The same moment through the G1 decoder on my camera-phone: 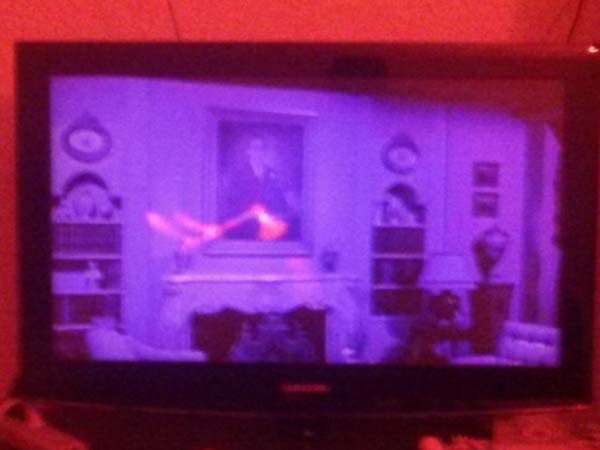 This is one of the weaker ghost moments in the film; it really is just a pair of arms holding an ax over something that is supposed to pass as someone’s head.

It’s also the first ghost moment of the film, and it ruins the discovery process of the plot for you, the viewer. The idea is that the father of the family that inherits the house also inherits a pair of glasses invented by the home’s previous owner. These glasses can see ghosts. The father hasn’t seen the ghosts just yet, this precedes his discovery. The audience gets to see it, making you in on the joke as opposed to identifying with the terrorized family. Or so I nit-pick.

The story drags, most likely because of this trick. When the son puts on the glasses, he’s faced with a ghost lion that just walks back & forth in front of the boy for a minute (that seems like an hour) before a headless ghost tamer stops the lion and saves the kid. Things like that, just to make use of the gimmick.

The story itself starts off with some potential. The father is a professor who is in severe financial debt. You find this out in a pretty funny scene where his wife calls from her home to complain about the movers repossessing their furniture as she tries to use it. (Rosemary DeCamp is the best part of this film, and is not the focus, sadly.) Their financial problems are somewhat answered when the professor inherits the mansion from his eccentric uncle, who apparently spent his life trying to trap ghosts. Also the glasses.

From there, several scenes involving the projected gimmick as someone in the family watches. There’s also a hint of a romance between the estate’s lawyer and the daughter. And then there’s the legal stipulation, that the family stay in the house and never sell it or the state parks will take ownership. I guess it’s in the will and seems like a strange way to keep the family stuck with the ghosts, but the lawyer promises to find a way to go around that rule and let the family sell the home. There’s also a monster who breaks into the house, and tries to kill the daughter, but it turns out to be a trick from someone who knows there’s a treasure buried deep somewhere in the house.

It’s not hard to figure out who this monster really is. And he’s dealt with thanks to a trap the ghosts had shown the father a little earlier in the film. It’s not operated by the father in that climax to rescue his son at the hands of the monster; the ghosts get involved and we cut to the family counting the money they find hidden in the house.

Was it worth sitting through the gimmick that clearly wore thin? No. I was making the tags for searches and I seriously had forgotten the title of the movie after typing this review.

Was the gimmick even remotely cool? A little bit. Like I said, Ms. DeCamp’s character has such an anything-goes attitude from watching their finances go up in smoke to dealing with ghosts possessing objects in their kitchen, I could watch a movie about her.

So you sat through this and it’s blah gimmick just because you had a Transformers G1 tech spec decoder? Yes. Duh.

Hey, I saw a movie where John Goodman made movies and tried to scare people. That was Matinee. It’s based on William Castle, though there’s an actual documentary, Spine Tingler!, we should check out sometime.