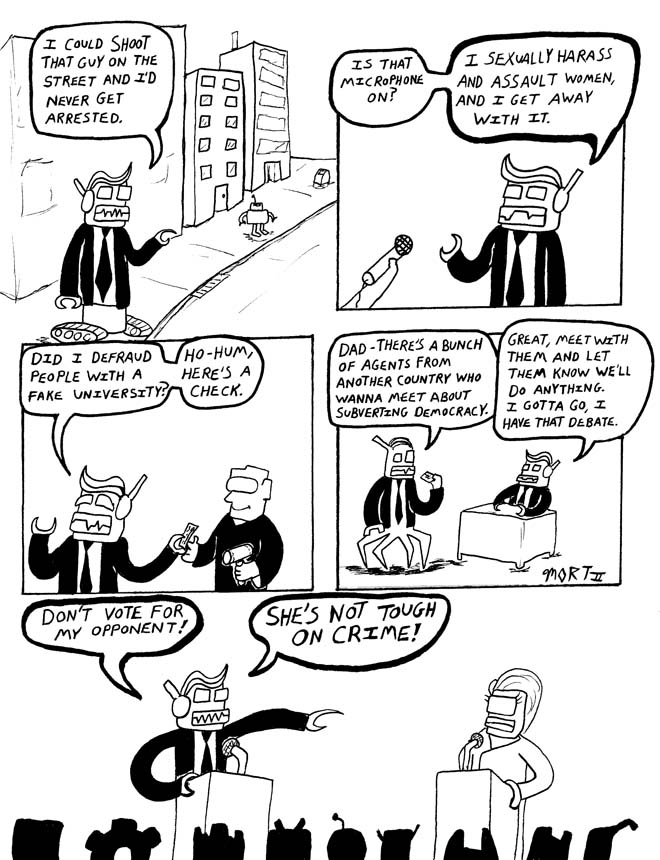 Cynical MAGA types will point at the last panel and start shouting “LOCK HER UP!” which isn’t the point of the strip. Trump is on his way to a helicopter and he turns to reports who are asking what he, an accused sexual harasser, thinks of Alabama’s Senate candidate Roy Moore (and allegations against Moore). Moore’s opponent is not TOUGH ON CRIME, the president tells the reporters.

The seat is for the SENATE. Anyone should be able to shout back at him, or anyone who thinks about these things: the SENATE is not going to get tough on crime. No Senator or Congressperson wrestled Bernie Madoff to the ground and handcuffed him. They had hearings about the Security & Exchange Commission’s neglect, sure. But no one in the Legislative Branch sits in a CSI lab comparing notes and looking at blood splatter analysis.

A man at the head of several business enterprises might be in court a lot, but it’s for matters related to his business. Any crimes are absorbed by the business, usually as petty activities (or not, depending on what you think are petty – some businesses will do whatever they can to misrepresent their sales or values to avoid paying taxes, etc.). Oh no he didn’t file a piece of paper. But what if sales of his building is involved in money laundering? What if he’s taking money from a group he claims in a charity?  What if he discriminates against paying tenants? What if he is willing to put his name on a fake university? What if he’s on tape discussing unwelcome sexual advances?

Why say you’re for law and order but callously joke about shooting someone in the middle of the street and getting away with it?

Okay, well, it’s a poor carpenter who blames his tools. I debated ending the strip with a debate because I had a specific point and I didn’t want to invite comparison with the real world opponent.

It’ll be a little light here this week – working on the coloring book still. Maybe some podcast entries (PLURAL) in the next week or so.