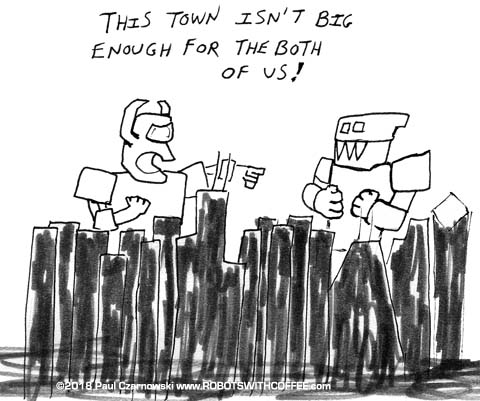 So yeaaaaah, if you didn’t know, I have a COLORING BOOK! Not one I’m coloring in, it’s one I designed and wrote and drew. It’s 20 pages of 30+ robot drawings and their bios, in the event that someone wants to make toys and we can have all that package artwork ready. And it looks like THIS:

I made some samples to show around and the response from both children and adults has been very positive. I appreciate the support and anticipation from friends and RwC fans who know about it. I’m currently going through a 2nd round of edits on the book for minor things like punctuation errors, but for the most part it’s done.

Which is great, because I plan on doing a Kickstarter for it. That’s the crowdfunding thingy the kids and artists and independent creators are using to help get these kinds of projects (comics, music, movies, buying a bowl of noodles once) manufactured. One of the drawbacks for the supporters is that the turnaround time can take a while if the creators of these projects aren’t finished yet. Some comics haven’t been drawn because the fundraiser is being used to pay an artist who doesn’t own the project. Mystery Science Theater 3000 had a huge Kickstarter to cover the costs of getting the rights to the movies they use,building sets, and hiring actors etc.

In the case of the coloring book, all 20 pages are written and done (with some minor editing to do). The inside covers are done, the cover is done. Like the comic strips in RwC #1, some of the original robot drawings on the first year of the dot com have disappeared for a project like this. Most of the writing (bios) is new, and there’s a few pages I made just for this book that serve as a framing device for the coloring book’s story. I’ve gotten a few sample copies already, and as mentioned before in the hands of a few friends and RwC fans, so it definitely exists.

The fundraiser will be to help make copies for fans and for stores who want to carry the book and for future comic show appearances. I’m still working out bonus material for different tiers of donations: stickers, buttons, paper dolls, a t-shirt, posters, and sketches. Hopefully RwC Jesse and I will have that worked out soon.

The other thing supporters are wary of is having the finished product shipped to them. Many creators have no idea how to get their finished product out the door, especially in bulk. FORTUNATELY, I have a 5+ years worth of experience in shipping out comic books (15 years total in shipping out books and magazines). I’m pretty handy at this sort of thing, so I will be able to get these out once I get printed copies of the book (and other extras).

So there you go: The RwC Coloring Book by me, Paul Czarnowski. Lemme know what you think of the Kickstarter plan, if you have any ideas on extras you’d like to see if this gets funded. Facebook Twitter email robotswithcoffee at gmail – THANKS!