The draining energy of editing

I don’t even know what I was drawing for Inktober, something to do with being drained or low energy or something, but as I was drawing it, I realized that I could convey the idea with less. I started off drawing a robot that ran out of juice after battling other robots (as Jesse points out, it’s probably from playing too much  Skyrim). So I ended up with this: 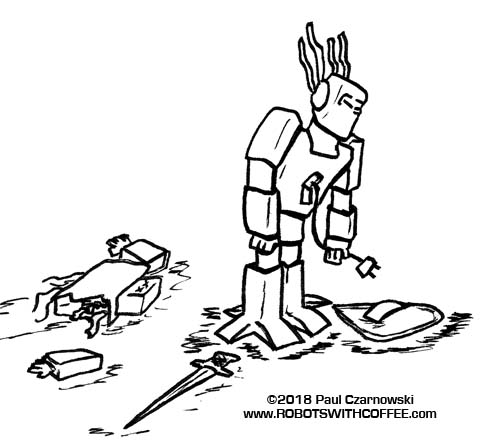 Not shown: pencils for another victim, and ravaged buildings in the background. I realized as  I was inking it that less is more. So I edited out a bunch and was left with:

See? You get the idea. Guy goes to charge up and he runs out of juice before he can reach an outlet.

Aaaaand here’s a video of me drawing this:

As I type, I’m preparing a week’s worth or so of posts up through (hopefully) TFCon. It’ll mostly be dopey robots inspired by inktober. I’ll be spending the rest of the week dealing with the post office to ship out Kickstarter stuff. They’re pretty particular about how much time they give you when you walk in to buy postage for every package, and I don’t want to mess this up if they’re not going to help me streamline the process to save tracking etc.